The yarn is from Japan and was acquired in Toronto. The resulting Handsome Scarf was knit at home, here in Windsor. At present he is winging his way across the Atlantic to his future home in London (or at the very least is currently at YYZ, awaiting departure.)

Though Spring is officially underway in London, the scarf Knows -- as every scarf Knows -- that the cold will come again. He has been practising patience since he was four mere balls of yarn languishing in the Stash; what's another double handful of months to a scarf? He can wait. 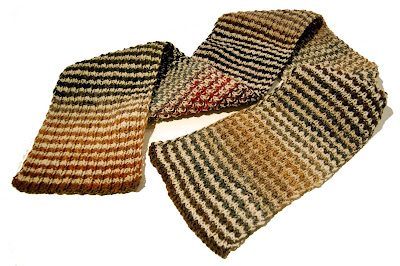 That is a very handsome scarf. I think even my husband would wear it.

I LOVE this yarn, it's really knit up lovely.

It is indeed a handsome scarf. I love the manly colors.

Can I add my voice to those proclaiming a deep admiration for this lovely bit of string?!

It's a beautiful scarf! Any chance you are going to write it up as a pattern for sale?

handsome indeed. DH won't wear hand knits, but I think I could get him to wear that easily. You have quite an eye for men's items.

Love that handsome cad! Thanks for sharing. I'm sworking on the Sea Mineral Mittens but my color choice isn't as lovely as yours.

Your job is lovely!
Hugs

Is this some sort of waffle pattern?

I will be releasing the pattern as a freebie very soon. It's a great all-purpose, highly-adapatable scarf.