Nice People, you may have noticed that I both love - and have - a lot of Things. Usually these Things call me from afar, tell me that they Need to come Live with me and then proceed to seduce me into taking them home (with me.) And sometimes - certain Things tell me that, while it has been Nice, and No Hard Feelings, But...it's time for them to leave me. It was fun while it lasted, but the spark is gone and...it's over. 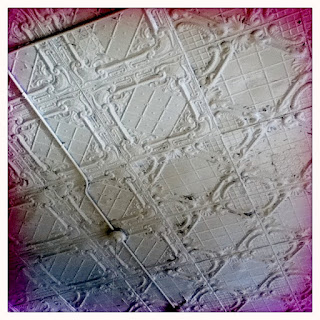 I have recently undergone one such parting this past weekend, when I said adieu to a decade's worth of meticulously hoarded - erm, collected - video games. Before you decide that this sounds silly, I must warn you that said collection consisted of only the most heart-warming (and -rending) bits of melodramatic escapism that money could buy. Longer than movies, more involving than books, for the past ten years - before knitting - these games were my substance of choice to abuse.

A chance exploratory tweet caught the attention of Rebecca, who had the made the most brilliant of suggestions - she would take them all off my hands in exchange for - you are sitting down, yes? - handspun. Piles and piles of her glorious, glorious handspun. Well; what would you have done? 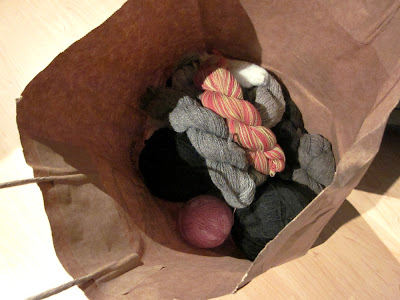 Which is why Saturday morning found me up and out before the sun was even up, bouncing around like a chipmunk on speed before that first drop of tea passed my lips. Up the 401 I sped under a brooding sky, completed the happiest, most-satisfying trade in the history of all trades and spent a lovely afternoon in Guelph and environs. The sun came out to greet me just as the Detroit skyline appeared on the horizon. Home. Having parted with Things that no longer suited me; having made someone happy by giving them to her. Having acquired a great deal of precious handspun yarn; having made a couple of new friends - the happiest of ends to one of the happiest of days. 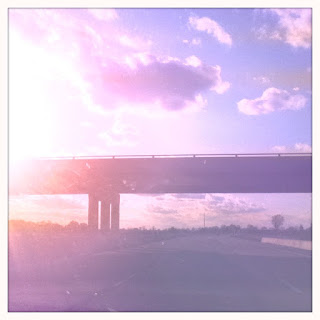