I finished the massive (and extremely cozy) Gandeymitts last night. They're for Tom, of course. Now I just have to line them so I can send them on their way. 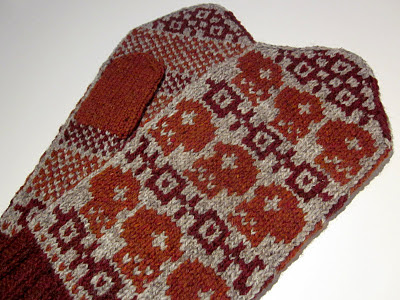 I'll be releasing the pattern shortly - you are only a scant three balls of Brooklyn Tweed SHELTER away from a pair of these. No more boring knits for men - so says I; so it shall be!
Posted by Unknown on Tuesday, December 20, 2011 6 comments:

I've got patterns coming out in all kinds of publications in the new year; as such I've been doing a lot of sample knitting lately. While it's nice to know that my work is going to be out there in some very fancy places very soon the short-term effect is that I can't show my new patterns (five, at last count) off online. Desperate to populate my Ravelry Projects page with something more than a bunch of blank squares, I made detail shots of (some of) my Super-Sekrit works in progress, and they look like this: 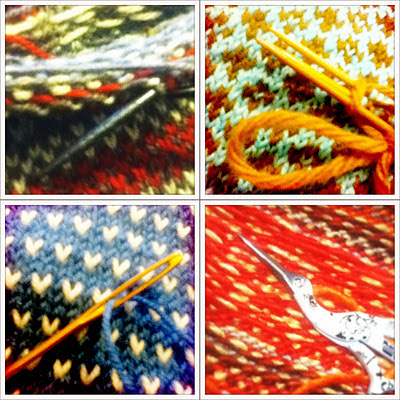 ...which I quite like, actually - both separately and as a grouping of four.

They act as a wee taster to the finished projects while not giving too much away (which, I must admit, I find as frustrating as the rest of you.) I find my (initially) unintentional inclusion of the tools of my trade a nice insight into the entire process of making (plus I just love the look and feel of my specially selected, beautiful tools.) They show a snippet of the pattern, project and object's life that is rarely seen by anyone but me - the "wrong" side, the inside, that unglamourous point in the proceedings when there are tangly bits of yarn exploding out in every which way. You know - all the messy stuff that I eliminate before I show you the thing and say "I made a thing! Here, look at the thing!"

So until I can show you the finished things, these will have to suffice. Again, my apologies - I am not very good at patience myself.

If you'd like some instant gratification, though, I think I may be able to help you out with that - I'm currently offering the pattern for my SpillyMitts for FREE. 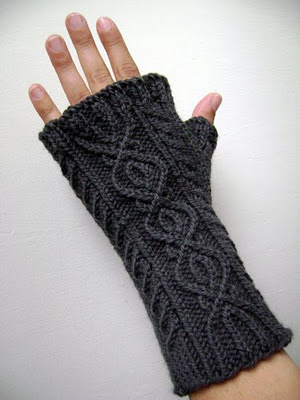 I'm still undecided on how long this offer will stand, so grab them while you can! 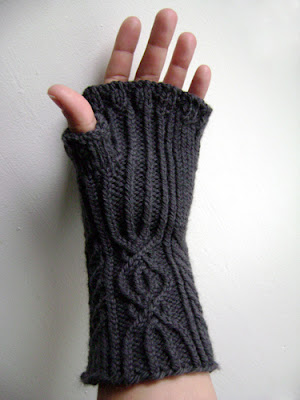 Back to it - there are lots of other things that I am supposed to be doing. More news as it becomes available, of course!
Posted by Unknown on Wednesday, December 14, 2011 10 comments:

A little something to make the inevitable transition into Winter that much nicer: I've just released two new mitten patterns in as many days.

The first is Thamesis, inspired by the River Thames him/herself. 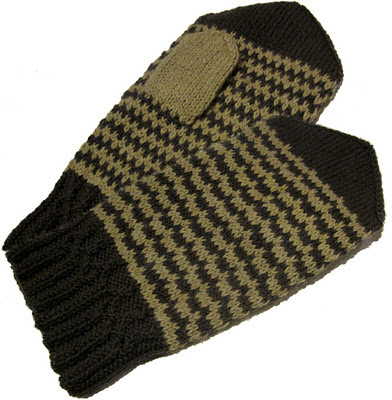 Wavy, twisty and watery allusions abound - from the undulating patterns of the palm to the twisted stitch cabling on the cuff: 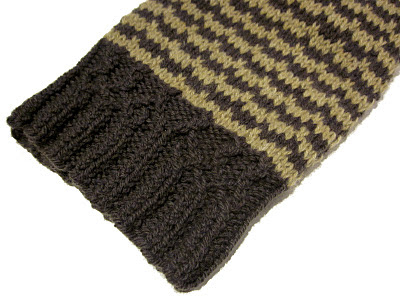 Here we see the Seven Springs that are sometimes cited as the River's Source.

The greenish colours I've chosen for these ones add to the River-y feel of the mittens, but please don't feel limited by my choice. I would love to see these ones in hot pink and orange; turquoise and red; yellow and grey; etc.

The other ones are the Illuminine Mittens, the third of my mittens to be named after a Thurston Moore song. It happens. 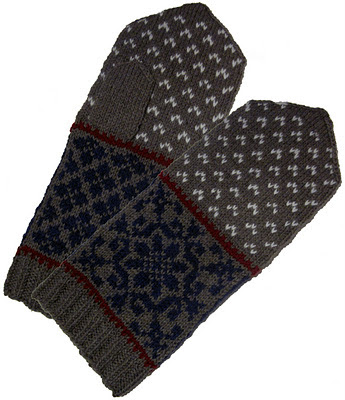 (For the curious, the other two are Benediction and Psychic Hearts.)

The Illuminine Mittens are the official mitten pattern of National Knit Mittens Month (NaKniMitMo) 2012, which is right around the corner - it kicks off on 1st January 2012.

Which reminds me, you haven't seen Benediction yet, either (or have you?) Here they are: 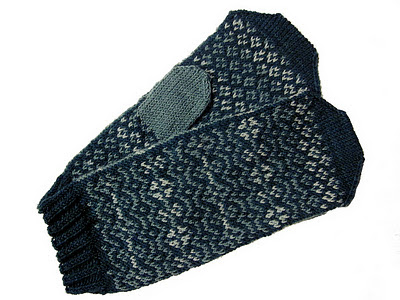 They made their exclusive debut at KnitCulture's kiosk at Vogue Knitting Live this past September, but now they're up and out for everyone to enjoy.

So yes, you have a wealth of new mitten patterns to choose from! As for me, I'll be continuing to work through my pattern backlog - the socks - including a free sock pattern - are up next. Look out.
Posted by Unknown on Monday, December 12, 2011 1 comment:

Because I love the colours. Because this one is going to be flying off before I know it - Chris' Chelsea Hat: 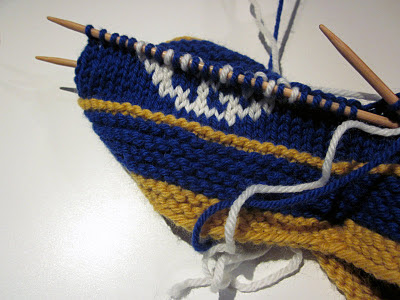 Because Chris loves Chelsea. Because making and giving and making happy makes me happy.
Posted by Unknown on Saturday, December 10, 2011 No comments:

Ever get that feeling that you're being watched?

You know - you're just going about your day, and everything seems fine... 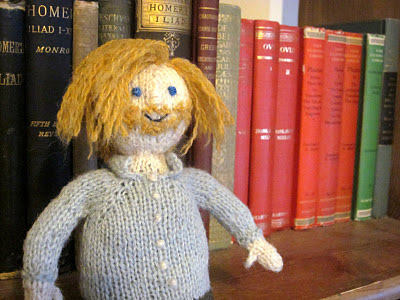 ...but there's this feeling that...something's lurking just out of view - possibly even...overhead? 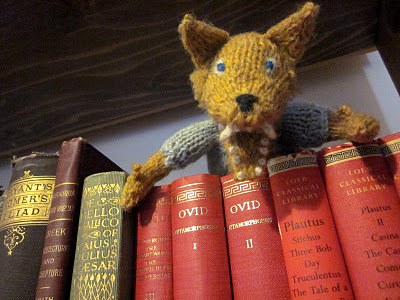 
__
The WereGandey/GandeyWolf has been Ravelled here. Learn more about his namesake - my friend Tom - here.
Posted by Unknown on Wednesday, December 07, 2011 3 comments:

There have been some especially fine types hanging around (ha) the DIA lately - I say hello to them whenever I am in. 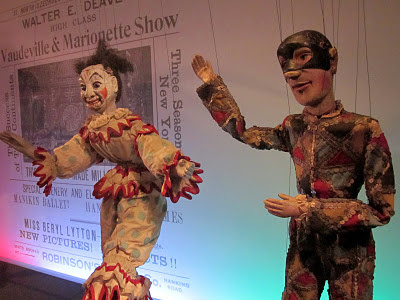 Like yesterday, for example. There they were, waiting for me, as cordial and jovial as always. I am trying to be strong about the fact that yes, they shall be retiring to their dressing rooms in a mere handful of weeks. 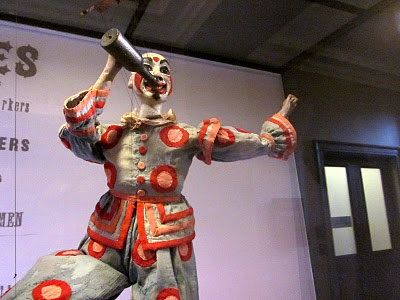 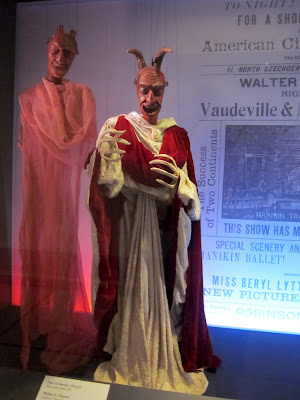 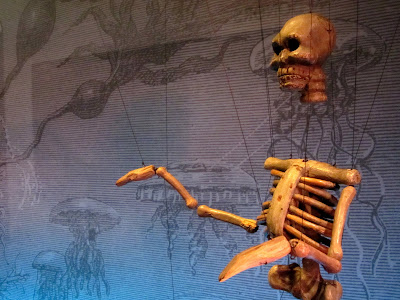 They are American Royal Mationettes, and they're from the grand old days of Vaudevillian Theatre. As for me, I am hard-pressed to choose a favourite. 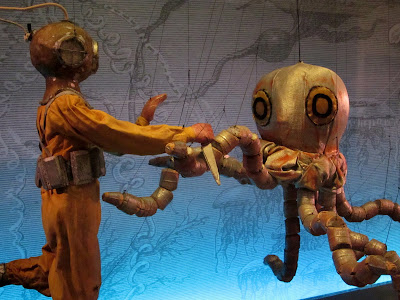 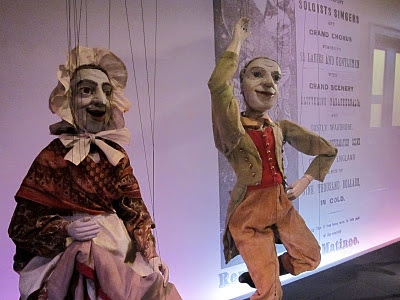 I can't help but think that one, in particular, has influenced me - or my output, rather - in a very deep and subtle way. 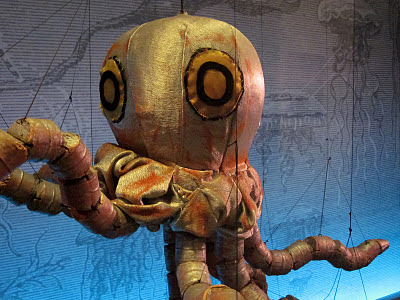 Just look at who's flown and slithered off my needles lately: 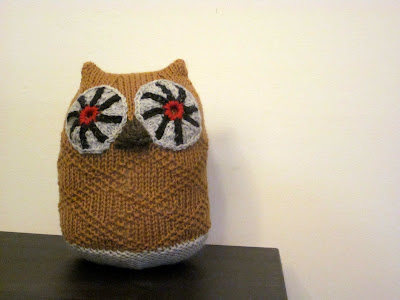 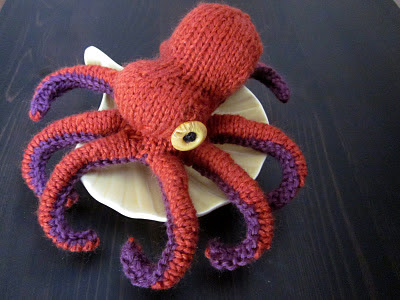 The sense of colour, the sense of play, the wide, bright eyes - they're all there. I think it's safe to say that my Vaudevillian friends have gotten into my head. When the curtain finally falls, I shall miss them.
Posted by Unknown on Monday, December 05, 2011 1 comment:

After years of searching - and then a several very intense months of coveting - I have finally acquired a Bog Oak spindle - and a very finely made one, too. 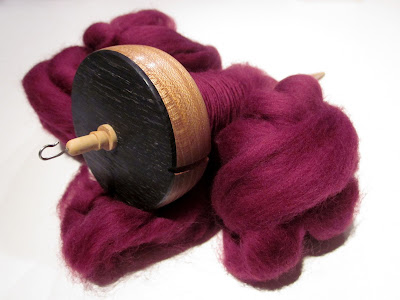 Well ok, only the very top bit of the whorl - the dark bit - is the Bog Oak, but that is enough for me. To think that this specimen has been carbon dated to 3300 BC - and is therefore over 5000 years old - is simply amazing.

Prior to this acquisition I had only had the briefest encounters with bogs and the things that have ended up in them. Years ago, when I lived in London, ON the Byron Bog was a favourite destination to...attempt on the weekend. I say "attempt," since it was often so water-logged that merely entering was impossible, unless one was keen on getting seriously bogged (ha) down in the muck. I always wanted to go deeper in, hunting for rare orchids and carnivorous plants - I think I may finally attempt this next Spring/Summer.

I can't help but wonder what has sunken into that particular bog, and I'm sure that something has, sooner or later. Perhaps some lovely wooden bits such as my piece of Bog Oak lie in its depths? Or maybe something - or someone - else lurks within? I had the chance to meet Lindow Man this past March which was quite a thrill, to say the least. I am pleased to report that we have another date scheduled for the end of the month.

And of course one should not forget the objects dropped into bogs (either accidentally or on purpose) that have made their way down the ages to us. Though it was a decade ago, I recall standing in front of a couple of fine bronze Scythian cauldrons - a rare opportunity that would never had happened had they not made their way into the belly of a bog all those centuries ago. They were handsome pieces - very sturdy and fine in their simple lines - and bore a patina that was quite unusual for bronze. My two companions wondered out-loud (and loudly) as to what could have caused this - but turned a deaf ear when I suggested that perhaps it was a by-product of dwelling at the bottom of a very acidic bog for centuries. To this day I can't help believe that I was on to something there.

I myself am not entirely familiar with the finer points of the chemistry of peat bogs but it seems to me that nothing short of a kind of magic occurs within their depths. Pots, plants and people go in - and then come out in the far-flung future. They are all the truest of time-travellers and we are fortunate to be able to make their acquaintance.

And while I'm on the topic of Scythians, here is Andrew Bird's song about them. I can't help but wonder if he saw the same travelling exhibit that I had back way in 2001. I will even forgive his mispronounciation of their name, but only because he is so cute.
Posted by Unknown on Thursday, December 01, 2011 4 comments: