Whenever we are heading west towards home on Riverside Drive I always make sure to look toward the river when we pass the former Ford property near Drouillard Road. The site of the first Ford plant in Canada from 1904 to 1953, is now a naturalized area along the Detroit River. The place where thousands of Model Ts and other cars were built is now home to native plants and wildlife, including a colony of pheasants, which is what I am looking for every time we pass by. The wild pheasants are notoriously furtive and tricky to photograph, so here is a picture of Phil, the pheasant who lives in my parlour, instead. 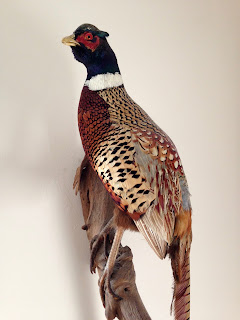 With so many major Ford landmarks just a stone’s throw from home it’s become something of a pastime for us to visit them each in turn. This weekend saw us finally make the trip to the original purpose-built Ford property, the Piquette Avenue Plant, where the iconic Model T was born.  And a fun fact: a Ford logo with “wings” on either side means that that vehicle was produced at the Piquette Plant. 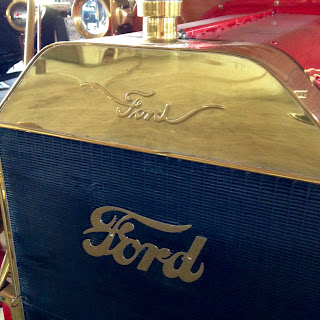 The Plant does not (and never did) have air conditioning but they did have festive cardboard hand fans available for visitors’ use.  Handy, should one “get a case of the vapours.” I thought briefly of the generations of workers who had to toil here in the steamy Great Lakes summer heat without the luxury of a free hand with which to fan themselves. 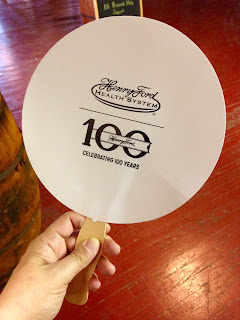 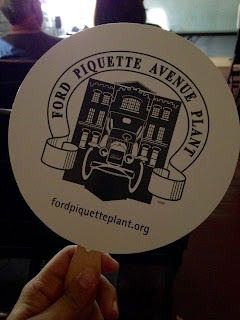 Built in 1904, the Plant really is a remarkable space, and one can tell that the building’s restoration must have been an incredible undertaking. I’ve always had a soft spot of long banks of tiny-paned factory windows. 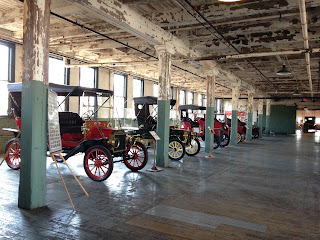 All those windows mean lots and lots of beautiful, bright light. Good for the workers to assemble cars by; great for the 21st century visitor to admire the colour and texture of the contents within.

This 21st century visitor, however, rather fancied looking out of those windows for the tasty vistas they offered. I’ve always loved Detroit’s industrial landscapes ever since I first connected with them as a teenager. Big old water towers were always my favourite. 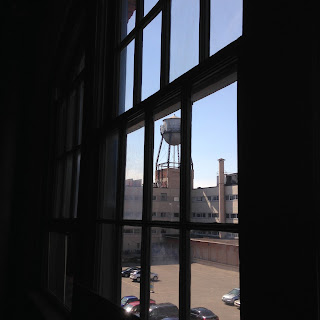 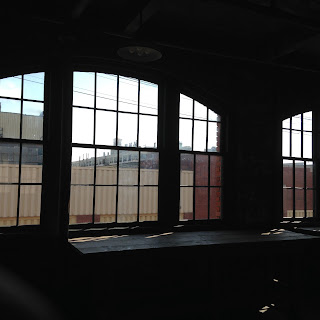 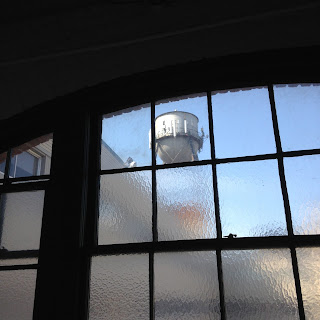 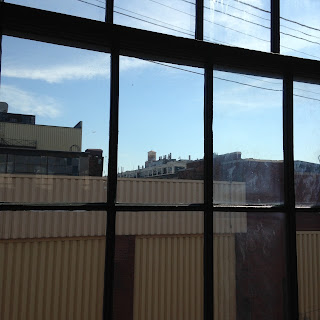 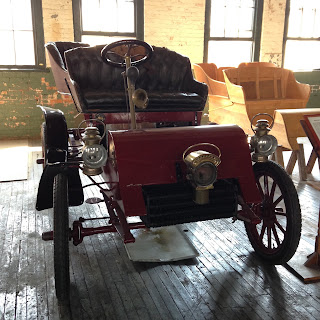 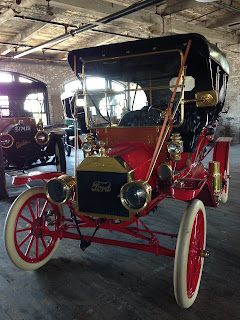 …as well as this specimen, which out docent told us was made at the plant in Walkerville - now the field where my pheasants now live. It’s always nice to run into a neighbour! 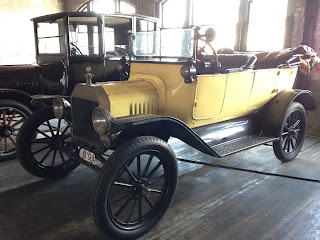 The tires and their various tread patterns are always a delight for the uncommonly observant. I especially enjoy the clever use of the words “Non Skid” in the one design. 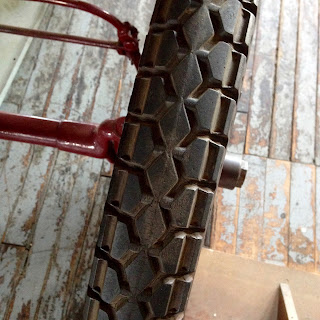 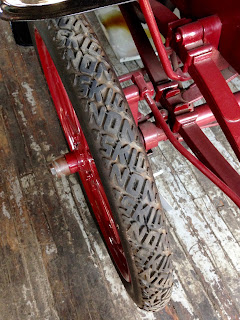 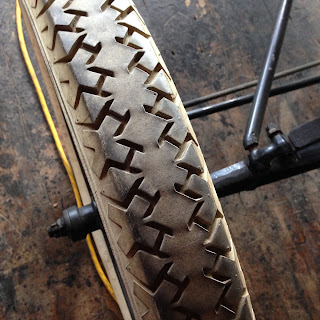 The old automotive company logos are fascinating, ranging style-wise as they do from somewhere in Rococo and Art Nouveau…

…right through to Art Deco with its stylized reworking of mythological and esoteric themes: Egyptian, Greek, and even Alchemical ideas all coming into play.* 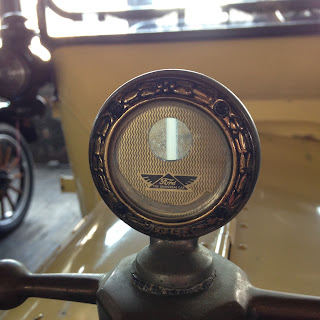 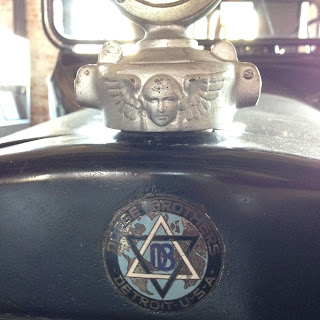 Coming back down to Earth, I spotted this hood ornament/mascot which again reminded me of my pheasant buddies. I could be mistaken, but I think it's a grouse. Still a nice field-dwelling bird! 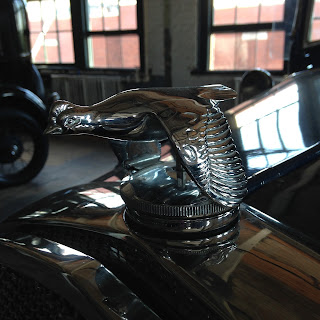 Henry Ford’s personal office at the Plant was a particular highlight. Here he is seated in it in a contemporary photograph: 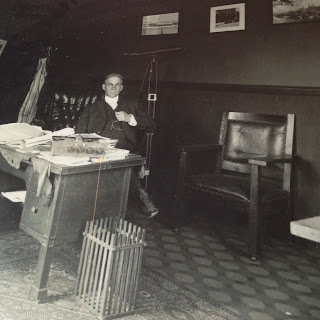 …and here is the actual room, recreated to look as it would have done the day that photograph was made: 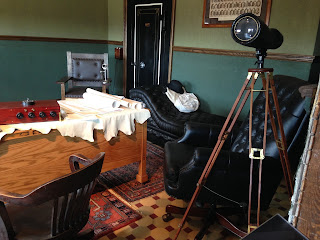 Naturally what caught my eye was the floor. 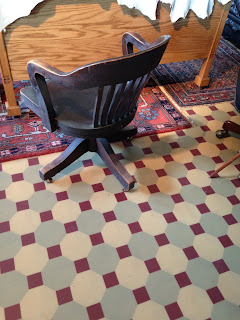 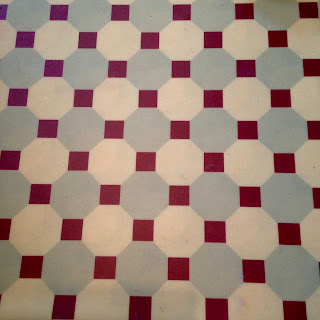 And if you find yourself fancying that floor as much as I do, and if you like working with WOOL, and knitting mittens, please do watch this space. (Ahem - say no more!)

*No, the six-pointed star in that Dodge Brothers logo is not a religious symbol. Instead it is two entwined triangles, one light, one dark, and each stands for one of the two Dodge brothers themselves. Some of you might recognize those triangles as representing both Male and Female forces; the Light and the Dark; Fire and Water as in Alchemical pursuits; or as a symbolic representation of the esoteric tenet “As above, so below.” Whichever it is, they ultimately represent two necessary, differing forces coming together to create something greater than the sum of their parts, which is the same whether we’re discussing the nature of the soul of running a successful automotive empire.

The Dodge Brothers themselves have always seemed like peculiar characters to me in their own right, most likely because they died relatively young, both in the the same year and of their elaborate Egyptian Revival mausoleum in Detroit’s Woodlawn Cemetery. I fully intend to investigate them more deeply in the near future.