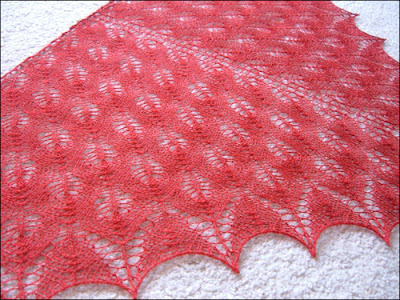 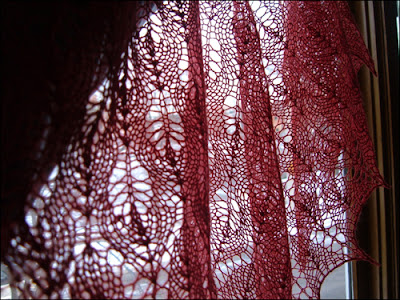 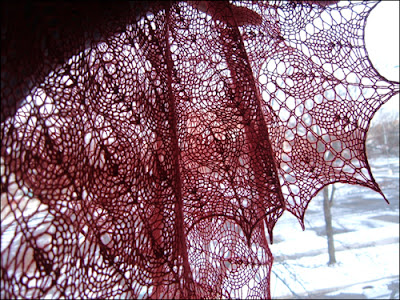 Notes: my first shawl and the largest lace item i've made to date. during this project i learned how to wrangle missed and/or added yarnovers from several rows away without ripping back.

Fun Fact: no lifelines were used in the production of this shawl!
Posted by Unknown on Sunday, January 28, 2007 5 comments:

this isn't the best picture (stupid flash,) but i'm sure you can tell what's going on here: 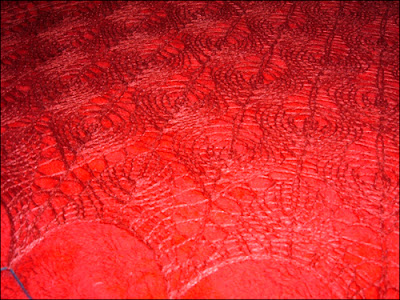 yes, that's the Shetland Triangle. it's currently pinned down quite thoroughly, thus preventing any chance of escape. now that i think of it, this is the first time i've ever truly restrained a knit garment like this--i know now that it won't be the last!

no, i don't have red carpet around here. that's a red towel in place to ensure that my white carpet doesn't develop a pink triangle. the Zephyr wool-silk (colour: carnelian) ran a little in its Eucalan bath so i didn't want to chance it (i have half a mind to run to Jysk and acquire several differently hued towels to accomodate future blocking projects.) now all that towel is doing is preventing me from getting a decent picture of the shawl. i'm not complaining too loudly as long as it keeps protecting my floor.

there will be finished shawl pictures tomorrow!
Posted by Unknown on Saturday, January 27, 2007 3 comments:

Email ThisBlogThis!Share to TwitterShare to FacebookShare to Pinterest
Tagged with: blocking, shetland triangle

just a quick post, since i'm on the move and i know you love pictures of unblocked lace. i finally finished the Shetland Triangle the other night! binding off seemed to take forever, but soon i found myself face to face with this: 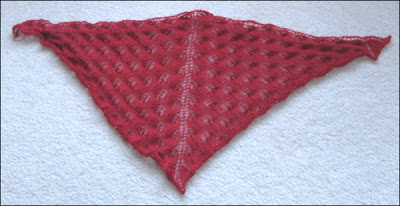 which doesn't look like much, really. it was only when i got creative and started stretching it a bit (faux-blocking, anyone?) that i ended up with this: 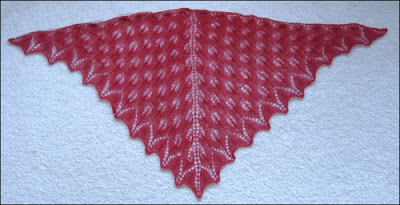 which is a marginally closer to what the actual shawl will look like after its bath.

finally, here's a detail of the lace, so far: 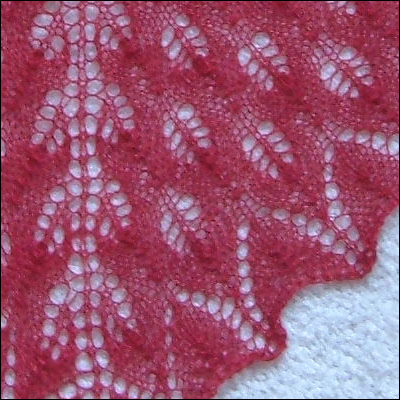 Email ThisBlogThis!Share to TwitterShare to FacebookShare to Pinterest
Tagged with: shetland triangle

a few posts back while discussing the Shetland Triangle and how close i was to finishing it i mentioned a three needle bind off. i had thought, for some reason, that the pattern called specifically for this. i promptly braced myself to learn the technique.

this clearly shows how little i had though about this bind off in relation to the garment currently being produced. three needle bind offs are for joining two pieces of fabric together--don't ask why my brain never made the connection between this and the shawl. what i wanted (and found) was a nice Russian/Icelandic bind off that will give me a lovely stretchy edge perfect for blocking into points. now i'm a mere four rows away from a completed, as-yet-unblocked Shetland Triangle.

i gotta run--the Thai curry's on the table. for now, have a picture of the first of my two spindle socks: 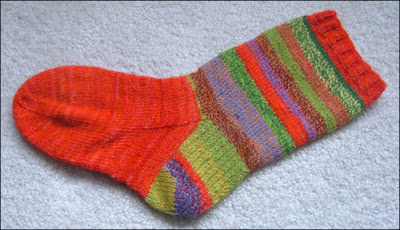 i spun all the yarns used in this sock and i dyed the pinky-orangey bits (pre-spinning) myself. at present i'm about 2-3" along on the mate, which is shaping up to be a fine example of a fraternal twin.

also, to my surprise it seems like i'm going to end up with lots of handspun left over from this pair. i'm sure that will find a home in a future sock (or socks.)
Posted by Unknown on Tuesday, January 23, 2007 5 comments:

due to popular demand i come bearing pictures ("finally," i hear some of you sigh) of the Shetland Triangle. these are not the best pictures (actually this first picture is terrible,) and this is mainly due to my overly excitable and springy circs. still, they give you a general idea of the shawl as it looks right now. is it a wraith? is it a vampire? is it an uruly shawl that doesn't want to even pretend that it's currently photogenic? well, it's one of the three--you decide. all i know is that i've been neglecting the thing for the past little while (you've heard the excuses before, i know.) excuses or not, i still love this shawl. it's been a long time since i've embarked on a "major" prokject that i've (nearly) seen through to the end that wasn't a pair of mittens or socks. this is also the largest, laciest thing i've ever made, unless you count the relatively undocumented (gotta do something about that) Dainty Bess scarf.

here's a detail of the lace. i told you that it's curling up like a bowl of ramen noodles! to make matters worse, every time i try to stretch it out to better see the pattern it threatens to slip off the needles. at this point i don't even want to joke about that. finally, as a sort of apology--to whom i'm still not sure, exactly--here's a peek at what i've been up to since yesterday: it's the Fickle Fingers scarf of last day's post's fame. it's a lot of fun to knit and the Noro ensures that i almost nver get bored...almost.

before you get your hopes up, no, i do not come bearing pictures of my Shetland Triangle shawl. i'm just finishing up the lace border (i'm six rows and a three needle bind off away from freedom) which means that it's high time to nip out to the LYS and grab some Noro Blossom for a new, totally unrelated project. what?

it all makes perfect sense...or not. the trouble started when i ran into the Fickle Fingers scarf in the Winter 2005 edition of IK (scroll down to oogle the fingers.) i'm always on the lookout for simple scarves with fascinating construction that allow me to abuse Noro yarns (ie. Edgar) and i was shocked to learn that this one nearly got past me. luckily the situation has been rectified and here i sit with Japanese needles (Clover Takumi US 9's) and yarn (Noro Blossom 15) in hand. clearly, it's time to finish my shawl. yes.
Posted by Unknown on Saturday, January 20, 2007 6 comments:

it's official--i've decided to move my knitting blog over here. some nice people have persuaded me, and i figure that it might just be time to leave livejournal. surely i can get over some fancy user pictures and backgrounds (right?)

so here i am! expect an official inaugural post shortly. warning: this new post will feature Extreme Shawl Content--unblocked lace and excessive use of yarnovers. viewer discretion is advised.
Posted by Unknown on Sunday, January 14, 2007 6 comments:

Email ThisBlogThis!Share to TwitterShare to FacebookShare to Pinterest
Tagged with: shetland triangle

almost a year to the day since the re-revival of this outlet we see signs of life. today i added some links. a whole year, and that's the best i can do.

oh, nevermind. i'm in the middle of knitting a shawl here. go check the progress and/or the other doings at Knitting Newspapers.
Posted by Unknown on Thursday, January 04, 2007 2 comments: