today it's hotter than hot and the humidity is just stupid. naturally i'm doing what i usually do this time of year--knitting a scarf. three scarves, actually, but who's counting? two of the three have been languishing in the progress basket for a couple of months now, so believe me when i say they've been enjoying the attention. they're in serious danger of being completed!

anyway, pictures and documentation are long overdue. here it go: 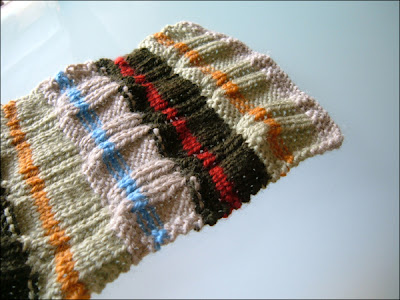 first, the Campus Scarf from Scarf Style. i just finished the first repeat today (they are incredibly long.) i'm sewing the ends in as i go along because i really don't want to go insane when finally faced with six-odd feet of scarf times four ends per colour bar. this is officially my new go-to mindless-knitting project (this is the only way it's ever going to get finished.) 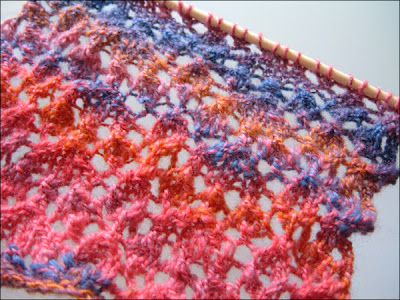 next, the Rosebud Mesh scarf. i've been threatening to post this one for quite a while, if my sidebar is to be believed. i was craving lace and itching to see how my Fleece Artist handspun laceweight would knit up, and this is the result. it's a mere handful of repeats so far but the random spinning and plying techniques i used are showing off the colours nicely. i'm going to try to pick this one up when i put the Campus Scarf down. 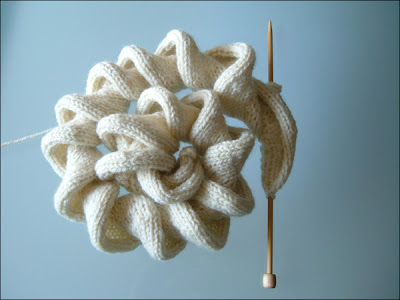 finally, Ruffles (also from Scarf Style) looking more like a nautilus than a scarf. when it's hanging down it looks like a giant piece of rotini. i'm knitting this critter LONG so i can wrap again and again around my neck til it piles up like a ruff. again, this is mindless knitting--the repeats are fast and easily memorized--which also makes it easy to put down. i find that i'm having to sit myself down for half-hours at a time in order to make any progress on this one.

so that's what's on my plate for the next little while, which is just as well, really. i'm already planning my Xmas knitting, about a month earlier than usual this year. i think this stupid heat is going to my head.
Posted by Unknown on Monday, June 25, 2007

The scarves look great! Dave's going to look very handsome next fall/winter and I'm sure it will be done by then. I like the handspun scarf (so pretty!) and the ruffley one. I want to make one now! What yarn are you using?

i'm just using some errant Patons Clasic Merino in Aran for Ruffles. i think i have just under two balls hanging out around here so that should give me decent length.

Loving that campus scarf... and I always love a little noodle!