here's a peek at the first Sea Mineral mitten so far: 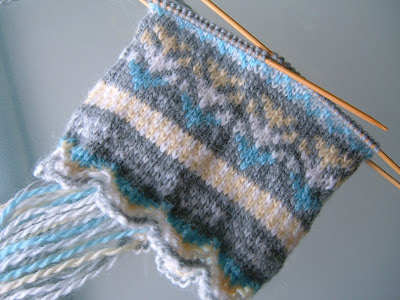 not the best picture, since it's getting late and i'm losing the light. try not to look at all those ends. i'm ignoring them, for now.

colourwork is about a million times easier when you knit with both hands at the same time. i'm carrying the background yarn with my right hand and the pattern yarn with the left--this is making the pattern stitches slightly more prominent in the finished fabric.

these days i'm not as in love with these colours as i was back in April, but i am still mostly enjoying them now. ideally i had wanted to have the butter yellow as the background colour but then decided early on that the darker grey would offer better contrast and a slightly more dramatic mitten. now that i look at it being knit up i could do with another darker grey and an even lighter blue, but that's just wishful thinking. i'm too picky sometimes.

pattern-wise, i think it's working well--a wavy motif or two to go, and then we move on to the star-patterned palm. earlier today i was wondering if i should add a small fish motif to the watery portion of the design and then decided against it. simplifying the cuff slightly should be enough to ensure that i actually finish the pair. the seaweed motif will have to convey the message of sea life on its own--just picture the fishes weaving and darting between the fronds.
Posted by Unknown on Friday, July 13, 2007

Email ThisBlogThis!Share to TwitterShare to FacebookShare to Pinterest
Tagged with: sea mineral mittens

It's gorgeous! You have a real talent. I can't wait to see what comes next!

That is one extremely attractive mitten.

I loooooove those colours! If you don't like them anymore, you can send them to me ;)