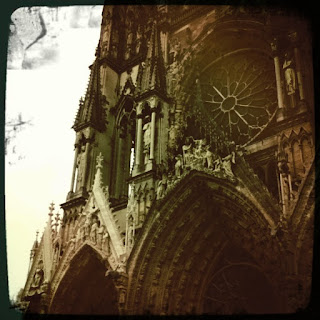 Notre-Dame de Reims turns 800 this year. It is cold inside; you can see your breath. Outside the almond trees are in bloom. I touch the massive stone pillars and they are so cold. 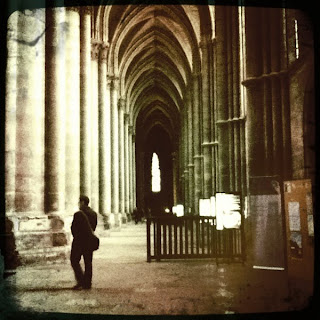 This is where Joan of Arc brought the Dauphin Charles to be crowned in 1429. I've always felt a certain closeness to Joan of Arc, but I can't exactly say why. I find this vaguely worrying. Still, I am glad that I am here. It feels right. I buy a tin of biscuits roses de Reims. They seem to be a thing here. I had bought Flavigny Pastilles (violet- and rose-flavoured) at a gas station just over the Belgian border. My favourite. 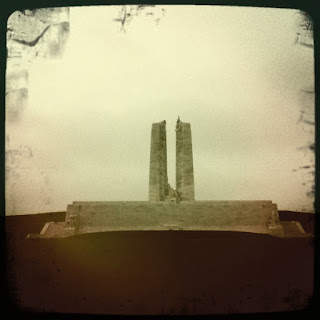 We go to Vimy to see the memorial to the Canadian soldiers lost there in World War I. Before I even realize it, I am crying. 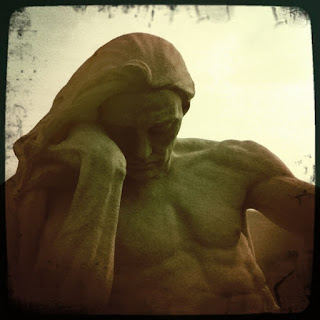 We find Heather's great-uncle's name inscribed on the wall.We are approached by a Canadian serviceman who tells us that they had just buried Thomas Lawless (whose remains were found when a house was being built) three days ago. I'm still crying. 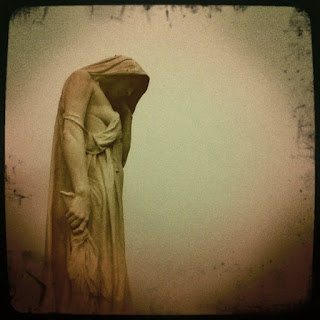 There are signs warning not to go out past the ridge as there are still unexploded munitions lying in the forest, under the trees. I think about rabbits and hedgehogs and badgers and voles. 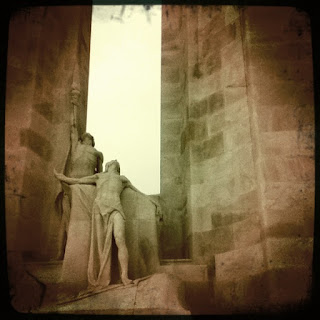 We walk the Canadian tunnels at Vimy, chipped out of the chalk. Our guide is from Prince Edward Island. He is a law student and his name is Ryan.

There is grafitti scratched in the chalk walls. Ryan points out a maple leaf carved by one of the soldiers. He turns off the light to show us what it would have been like to have been here in wartime. He asks us to imagine the sounds of shells falling; to imagine how it felt to know that you and/or the people sitting next to you might not return to the cramped, damp "comfort" of the tunnels.

Ryan takes us back outside. We look across to the German trenches. Here, the trenches are so close to each other -- literally a stone's throw away. He tells us that there was an unspoken truce between the two sides -- after all, who wants to worry about being shot at day after day? Life in the trenches is hard enough as it is. 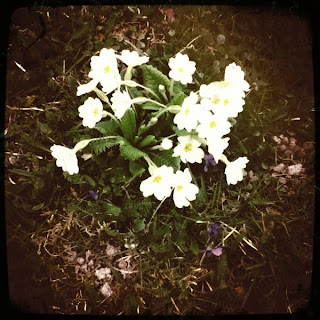 We tour Taittinger. We walk the Saint Nicaise chalk mines where they cellar the champagne. The Romans dug these mines. You can see how they used to cut the blocks away. 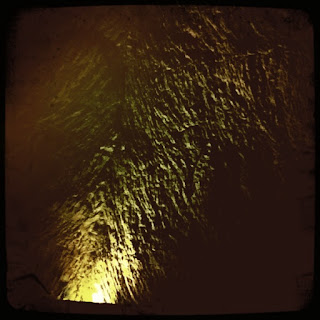 I run my thumbnail on the wall and the chalk comes away easily. I have chalk under my nails. I think about Tiffany Aching. There is grafitti everywhere here, too.

Our effortlessly beautiful French guide tells us they have no idea when the grafitti is from. She points out the underground remains of the abbey that once stood here before the Revolution tore it down. She tells us that people took shelter here during both World Wars. She makes tired, lame tour-guide jokes. I am disarmed by the marks left here by those who have gone before. I wonder who they were; who they loved; who loved them back. 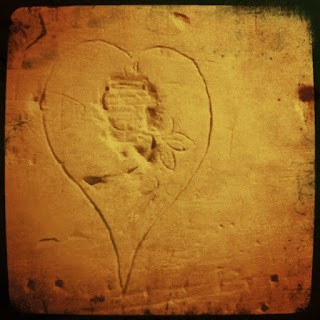 We drive back to Brussels, eating the waffles we bought at the gas station. They are the kind with the sugar pearls in. It's getting dark here in France. The chalk by the side of the road is so white. The villages clustered around their churches are so lovely. Their lights come on. It starts to rain. We speed home in the cold, dark wet.

I love your photos; what kind of camera did you use?

Thank you. I took those with my iPod, using the Hipstamatic app.

Thanks for the response! I've read about that app, now know I need to get it pronto! I'm assuming this trip will inspire some more lovely glove patterns?!

I'm quite jealous of your journey; I would love to go over there some day.

Violet pastilles have been one of my all time favorite sweets since childhood.

I think you should make some Joan of Arc mittens. How could it be otherwise?

You have taken some beautiful pictures to accompany your moving account. I know the area well, it is achingly poignant to see all those places of heroism and death

I absolutely get it about France and spontaneously crying. I did the same thing in certain parts, although haven't been to the part you've been to.

I am so glad you found John Gordon. He was not included in the Book of the Dead, so it pleases me to know that his sacrifice has not been forgotten. Someday I will unravel that mystery.

I think I would also be spending most of my time at Vimy crying.

Have you read Jane Urquhart's "The Stonecarver"? The memorial is central to the story... an incredible book.. but, then, it's by Jane Urquhart...
Your photos are on par ... Elizabeth

What a powerful experience. So glad you took the time to do this.

Thank you. Me too.